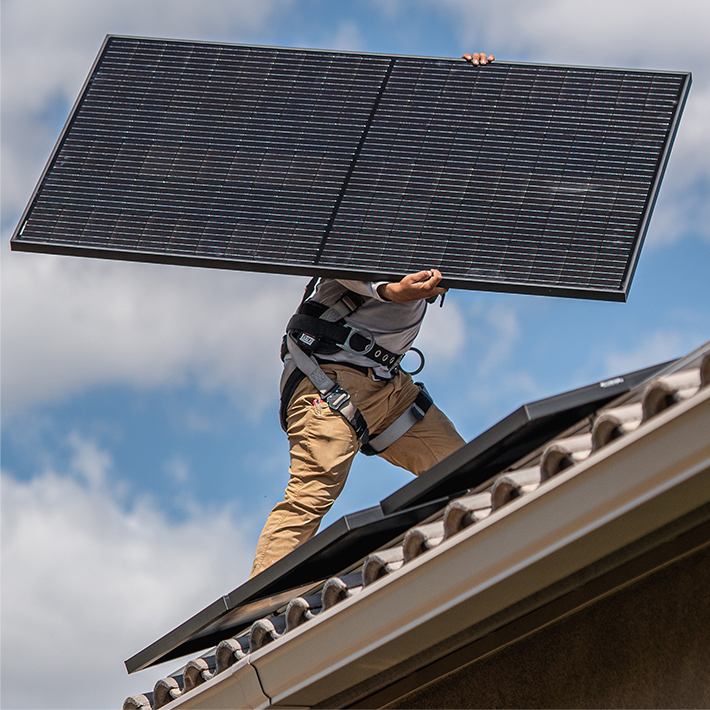 Solar energy allows you to harness the power of Arizona’s abundant sunlight. Modern solar panels are remarkably efficient and technology has improved greatly since the first systems were created. Read more about solar energy history below.

Although this isn’t quite the same thing as solar panels, human beings have been making use of solar energy in creative ways for many centuries. There are records of people concentrating the sun’s power with magnifying glasses to make it easier to create fire as early as 700 BC.

In 1839, French physicist Edmond Becquerel observed the photovoltaic effect. This is a process that produces electric current from light or radiant energy. In 1876, scientist William Grylls Adams discovered that the element selenium produces electricity when exposed to sunlight. This led American inventor Charles Fritts to design a photovoltaic cell in 1883 using selenium wafers. However, this design was never built.

Although Fritts made a design for a photovoltaic cell, the first cell to actually be built was in 1954. American researchers David Chapin, Calvin Fuller, and Gerald Pearson of Bell Labs in New Jersey constructed a device that was able to convert sunlight into usable electricity. The device was very inefficient by today’s standards at 11% efficiency, but it was a major breakthrough and paved the way for future advancements in solar energy technology.

The first commercially available solar cells hit the market in 1956 but were too expensive for the vast majority of consumers. During this time, solar cells began to appear in toys and radios, which was a more cost-effective use of the panels at the time. In the 1950s and 1960s, solar technology was also used in satellites for both the United States and Soviet space programs.

Technological developments in the early 1970s brought the price of solar energy down significantly. At the same time, oil prices began to rise, increasing interest in other forms of energy such as solar power. The adoption of solar energy was slow but steady from the 1970s through the 1990s, with various developers making improvements to the systems that were available. Panels got smaller and more efficient during these decades, and government policies favored the continued development of renewable energy sources.

In 2005, the United States passed the Energy Policy Act, which established an investment tax credit (ITC) for residential and commercial solar panels. Various extensions have been granted since then. Currently, you will get a 26% federal tax credit if you install solar panels in 2022, which will decrease to 22% in 2023 and end in 2024 if there are no further changes.

Modern solar energy systems are more efficient than ever. Installing panels allows you to save money on your energy bills each month, all while helping the planet. At Solar Pros, we use the best solar panels available so you get the most benefits possible.

If you’re ready to make the switch to solar energy, contact us today.